The city at night can be a terrifying place. When one wonders the city in the evening, temptations and darkness can pervade and draw the individual into a nightmare world. In the late 1970s and into the 1980s, painters both in the United States and in Europe began to address the anxiety and zeitgeist of the current era by applying early 20th century expressionist styles and approaches. Bold brush strokes and color with an emphasis on the subjective and emotional response to world around was key in this re-emergence of expressionism what was then and now referred to as Neo-Expressionism. Robert Yarber's solo show "Return of the Repressed" at Nicodim Gallery marks a return to Los Angeles in more than 20 years and with his new body work brings a new examination and appreciation of Neo-Expressionism. Yarber is a master at exploring the night both as a metaphor and as a real place where darkness challenges the survival of the soul.

Yarber's paintings are dark not only in their subject matter, they are dark in their composition and color. Night is a pervasive theme in Yarber's oeuvre. Neon colors with a dark background accentuates the figures presence. From laying paralyzed in a hotel room, to a seance in a garden, the nighttime landscapes plays a role in the scene that is being revealed to the viewer. In some of the works, a light is seen in the horizon and it is not clear whether this is dawn or the sunset. The figures are caught in a limbo where the night is beginning or where the end maybe near. In these landscapes, people float in the air of night. This image is an important aspect of Yarber's work.

Love, which in gentlest hearts will soonest bloom
seized my lover with passion for that sweet body
from which I was torn unshriven to my doom.
Love, which permits no loved one not to love,
took me so strongly with delight in him
that we are one in Hell, as we were above.
Love led us to one death. In the depths of Hell
Caïna waits for him who took our lives."
This was the piteous tale they stopped to tell.

Truly great artists act as tour guides and take the viewer to places that others dare not travel. Robert Yarber"s "Return of the Repressed" is an excellent show. Yarber is a master at conveying a subjective landscape where magic, passion, sin, and condemnation meet. The neon world contained within these paintings are tableaus of drama in which the characters are engaged in a the debauchery that a city is fertile ground.

In the late 1950s and early 1960s, the art world underwent a double schism. On one hand, artists began to embrace commercial imagery and iconography in Pop Art, and on the other hand art was reduced to the simple and primary shapes in Minimalism. In New York, Minimalism began reducing art into basic forms and shapes. Artists such as Donald Judd and Carl Andre were concerned with creating art from primary shapes to convey architecture, like Judd, or poetry, like Andre. Around the same time, artists on the west coast, Southern California in particular, began to experiment by constructing space  in the use of light aptly named "Light and Space." Larry Bell was one of those artist who embraced minimalist visual principles while using glass, light, perception and form. Larry Bell "Complete Cubes," currently on view at Hauser and Wirth, Los Angeles, examines an aspect of his work that combines the physicality of minimalism in the use of the physical cube, while adhering to the application of West Coast Light and Space principles that places his work in the context of other artists like James Turrell, Robert Irwin, and Douglas Wheeler.

While looking at the cubes, one must ask, "What makes Larry Bell a Light and Space artists?" The cubes, strewn around the gallery, come in different sizes. With few exceptions, most of the works are titled "Untitled." Large and small cubes mingle with each other. Do not let the simplicity of the cubes fool you. Each are physical and solid. However, the cubes are constructed in a way that reveal their secrets. Viewing Bell's cubes is not for the passive. Each of the cube's faces are constructed of glass. The glass is treated in various ways, including darkened, stained, cut and shaped into forms within and outside the of the cubes' faces. To understand is to walk around and circumvent each object to experience the effect. Motion creates emotion as the viewer moves and positions the views of the faces on each cube. The glass creates a translucent architecture; an environment within each cube. The degree and extent of translucency uses light and shadow to create multiple effects. The play on geometry is about addition and subtraction, accession and removal, formation and de-formation, and ultimately creation and destruction of the structures within and outside each. Each cube uses the surrounding light and dark as means of studying these various states of formation and its opposition.

Larry Bell's cubes provide a bridge between the Light and Space artists of the West Coast, and the Minimalists of New York City. However, recent development of his cube works suggest a departure from the physical by emphasizing the translucent and ephemeral. The most recent, titled "RWB in Venice Fog" is an installation of three room sized cubes, each comprising of a central color structure surrounded by a translucent container. The colors in each sculpture are blurred; clouded within a container to create an ethereal effect. Bell seems to convey the natural effect of fog upon the basic colors of red, white, and blue. The three cubes dematerialize the solidity and structure of earlier works. It is in the most recent works that Bell harmonizes with his fellow Light and Space artists. The survey of Bell's cubes at Hauser and Wirth, Los Angeles examines the development that demonstrates the emergence an art that is physical in its presence, but disposes of passivity and utilizes light, shadow, form and translucence. 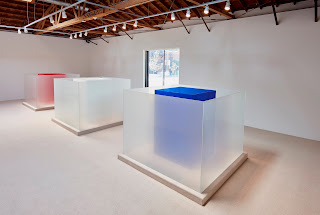 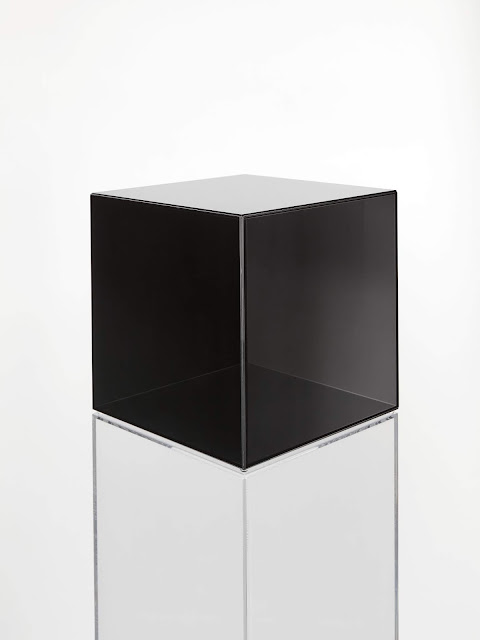