Mark Ryden's latest exhibition at Kohn Gallery's new space in Hollywood is a visual delight. Ryden's work is well rendered and intelligent on so many levels. In his latest show, Ryden explores the sentimentality of the 1890s and the underlying themes that are hidden from such sentimentality while making references to contemporary pop culture.

When entering the gallery, one is stunned by the pink colored walls that cover the gallery. Pink both matches the works on the walls and provides a calming effect on the visitor. The works make reference to art history, American history and lore, late 19th century Victorian and current pop culture. There are portraits of Abraham Lincoln along with portraits of a doll figure wearing a meat dress, referencing Lady Gaga. There is a portrait of Katy Perry sitting along with various cute animals wearing a garden dress. The artist wants to make both an analogy and allegory about the Victorian and the current state of contemporary society.

The artist explores Victorian decorative design, clichéd notions of “Main Street USA,” small business and immigration (“The Meat Shop”), and vaudeville shows with a dark and complex sentimentality. Integrating the Christ figure and Abraham Lincoln with his wide-eyed, petticoat clad ingénues, Ryden presents the viewer with an unreal and very oddly camp version of American history. His is an exploration of what becomes cliché, what becomes kitsch and what becomes forgotten. Yet through it all Ryden makes some of the most richly rendered, beautifully glazed, idealized yet disturbing works of contemporary art. Like his contemporaries John Currin, Lisa Yuskavage and Neo Rauch, Mark Ryden uses a skillfully honed technique to render his polished and emotionally charged works.

The most compelling work is a large scale piece titled "The Parlor (Allegory of Magic, Quintessence and Divine Mystery):" a 96 x 120 inch painting with a wooden frame hand-carved in bas-relief. This work, I think, encompasses the entire thesis of the show. The idea behind the show is that a false nostalgia exists that places an innocence in the 1890s and in the past. The 1890s may have been a time of innocence, but it was also a time when society began to explore esoteric and occult ideas. There were dark undertones that prevailed behind the alleged innocence of the 1890s. Dracula, Jack the Ripper, and the Symbolist art movement all began or were popular during the 1890s. In the parlor, the scene portrays both a group of young women in a parlor hand various visitors mingle in a seance like setting. The center of the floor shows a baby with a device that has esoteric writings on the spinning wheel. The figures in the background are those myth including the snow yak, the evil eye, a snake, and an unrecognizable creature. Joining the party is death, standing on the left hand side carrying a tarot card. The bas-reliefs make reference to Egyptian and Esoteric symbols. In the rest of the exhibition, various pieces of Americana and objects referring to the "Gay 90s" are prevalent in the show.

The "Gay 90s West" is a smaller version of a show in New York. Ryden's beautifully rendered works are both dream and nightmare. The works mirror a society that longs for a golden time, yet the artist reveals something that both horrifying and beautiful that is hidden from the viewer in a society. I think Ryden's approach to subject matter is very similar to Japanese contemporary artists such as Takashi Murakami and Yoshitomo Nara. Like Nara and Murakami, Ryden employs child-like innocence and nostalgia to hide a sinister aspect to human behavior. To Ryden, the innocence of the past only hides the dark truth of history and society.  This is a wonderful show, and it is highly recommended. Go see. 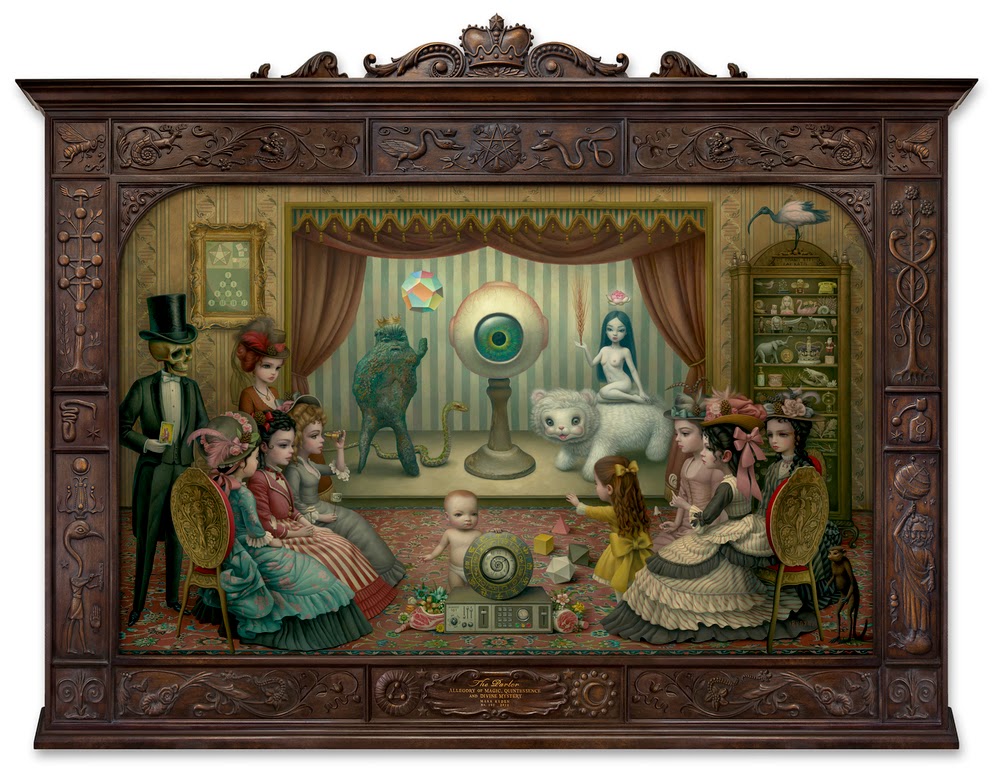 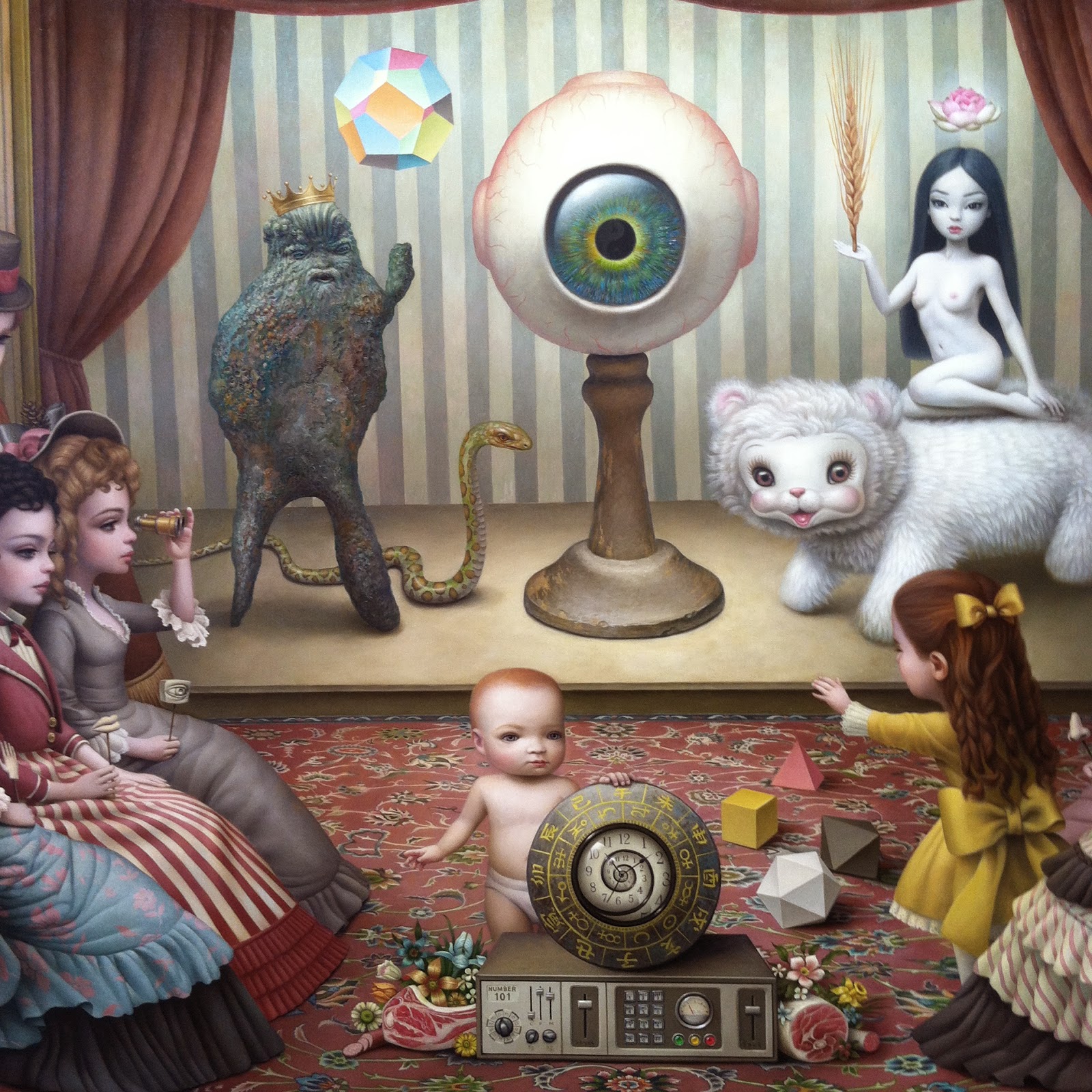 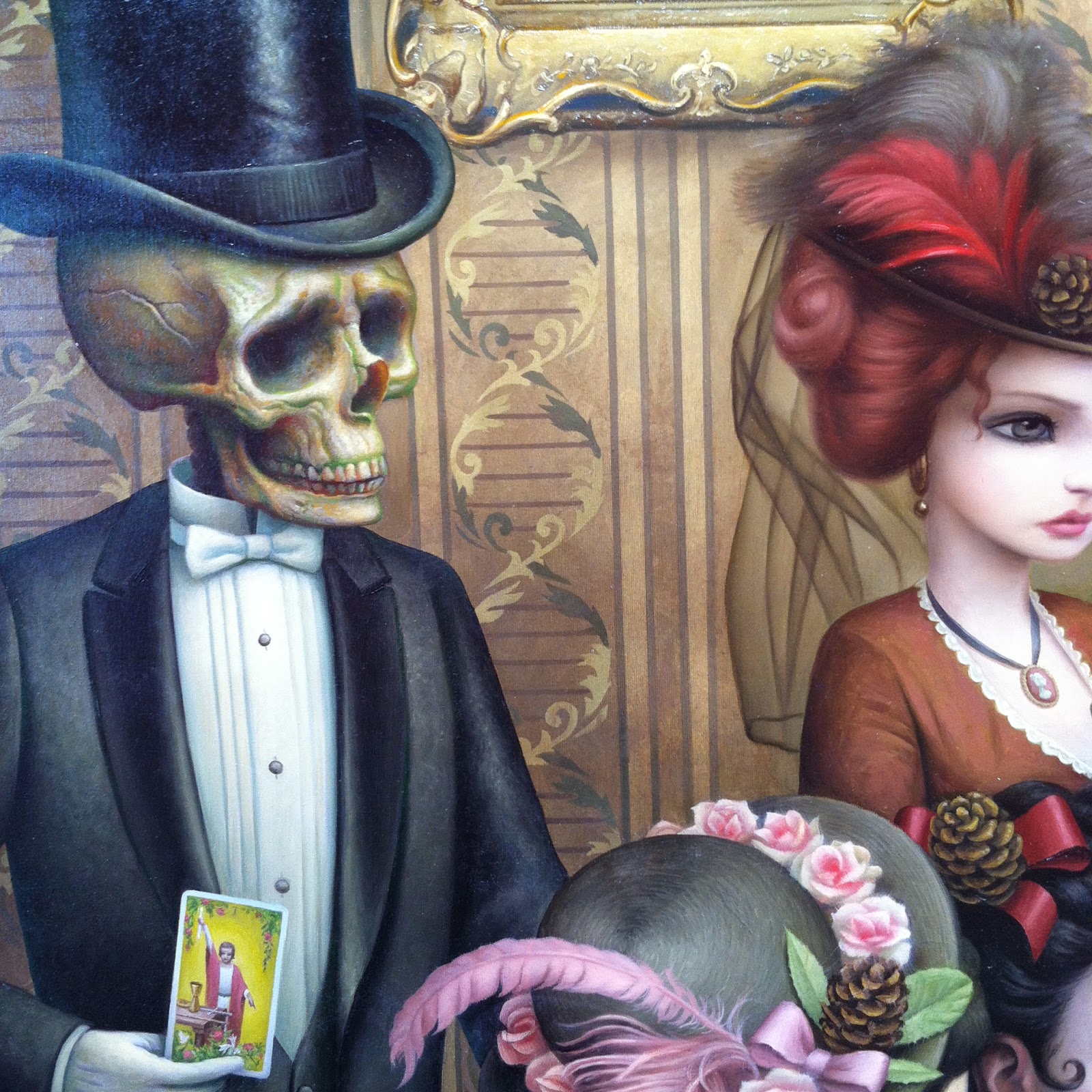 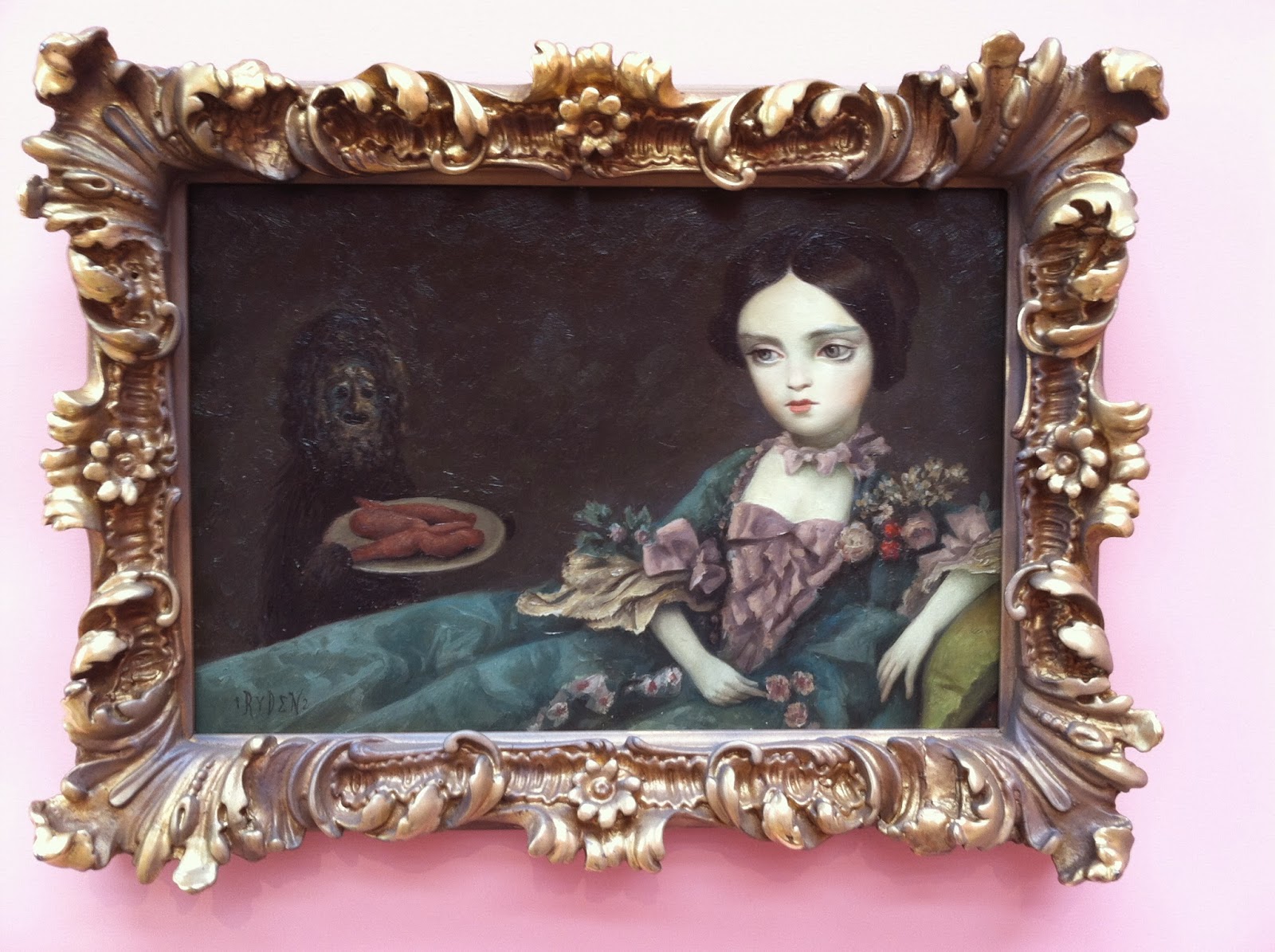 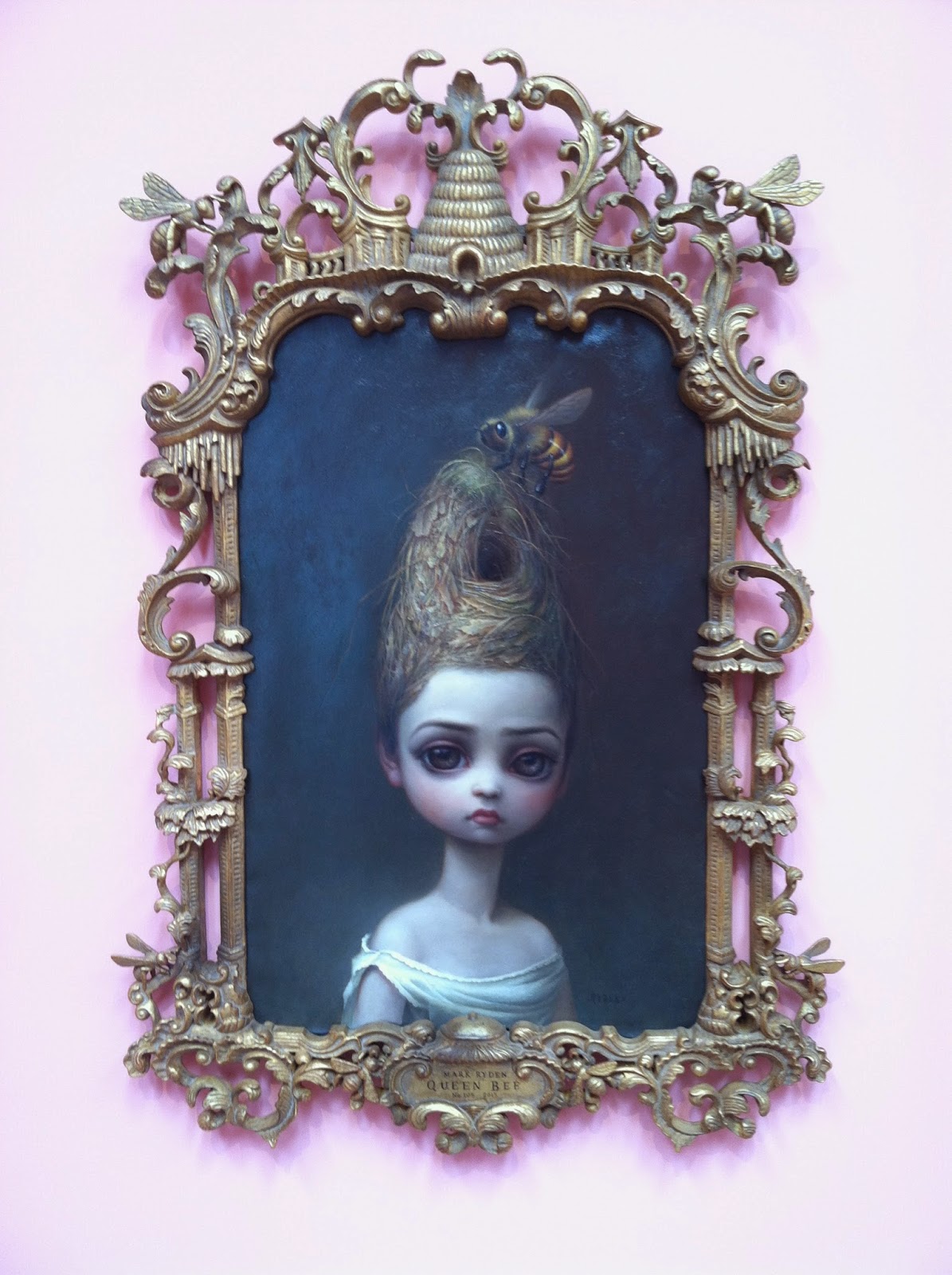 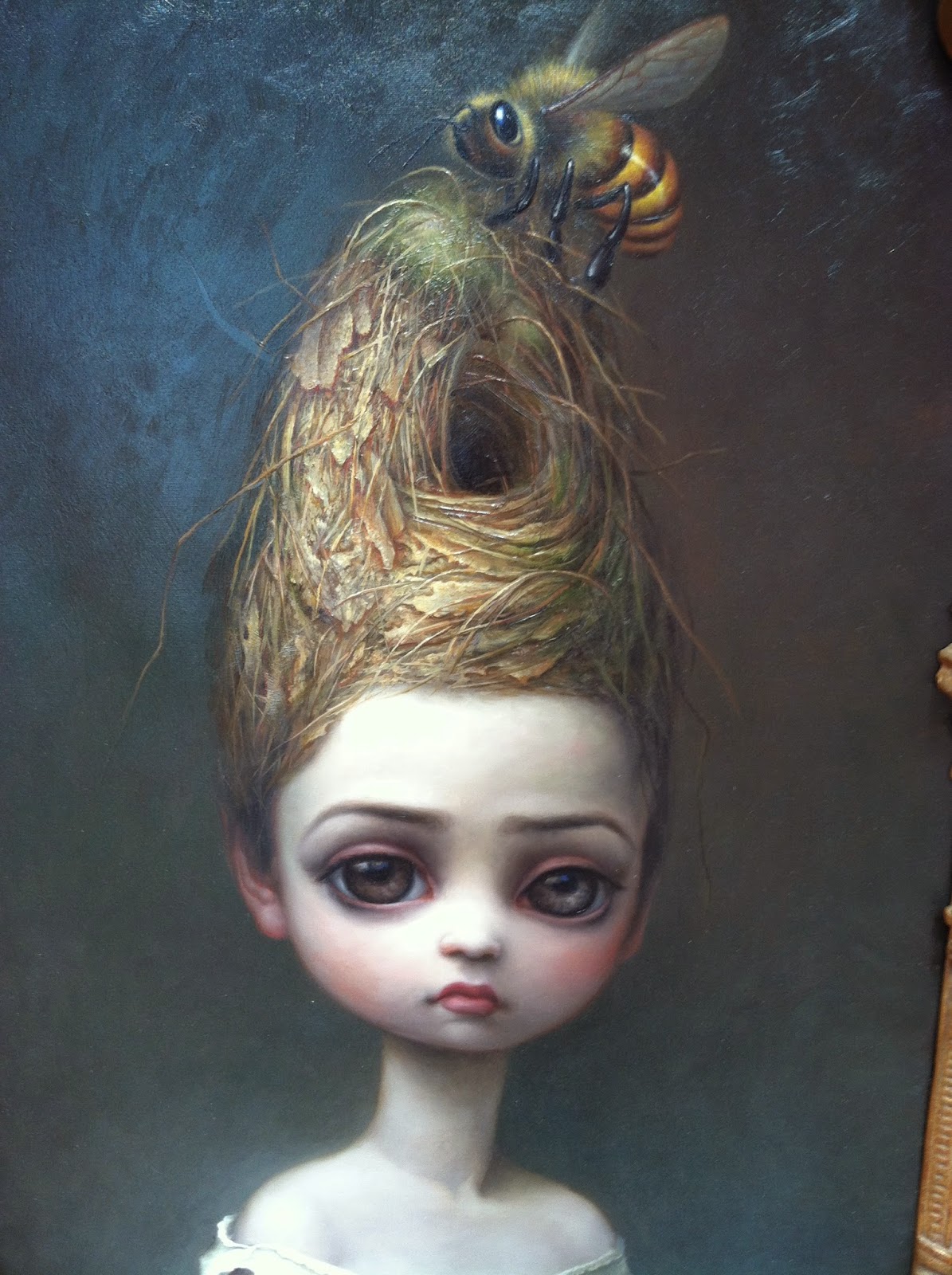 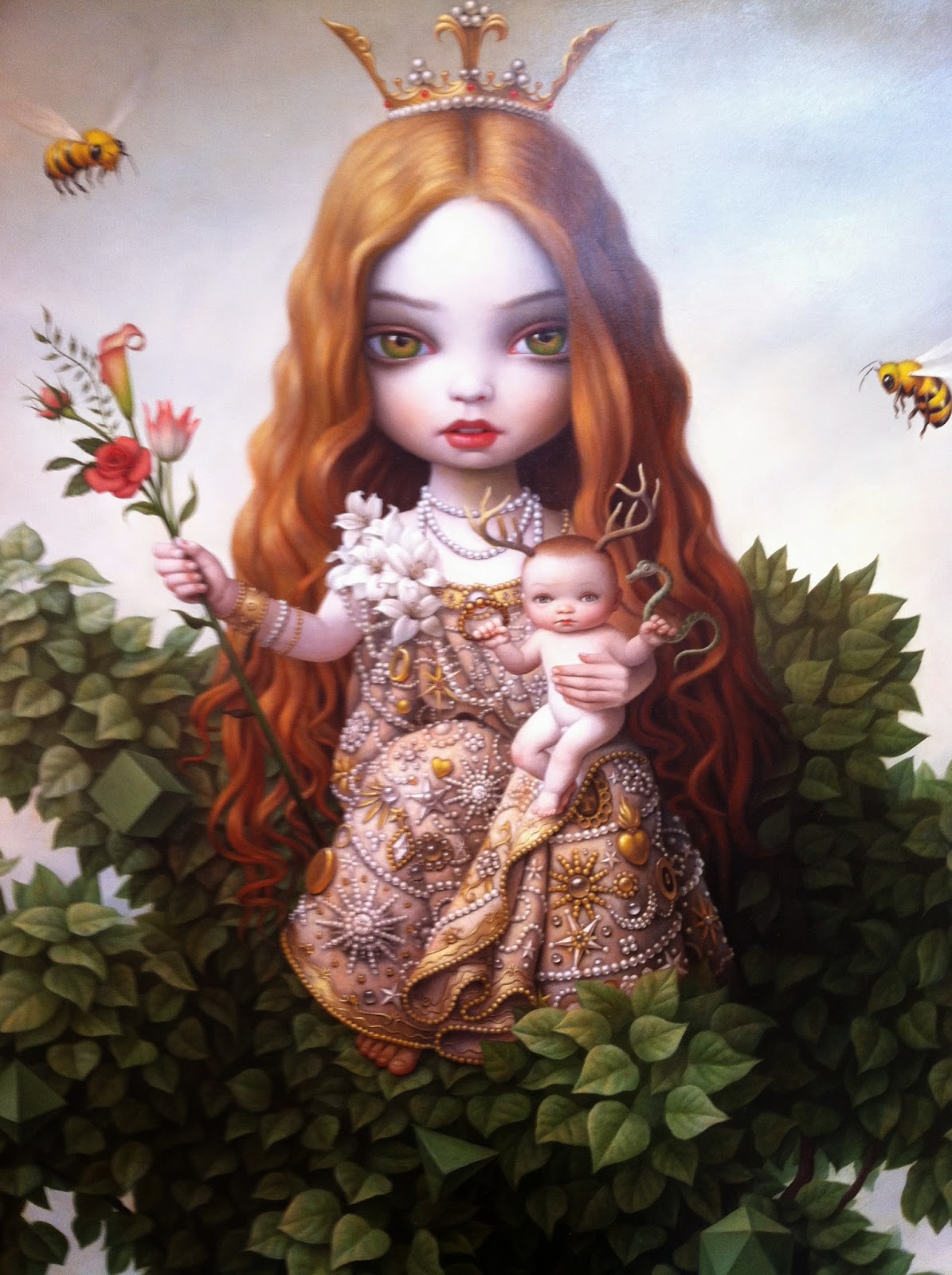 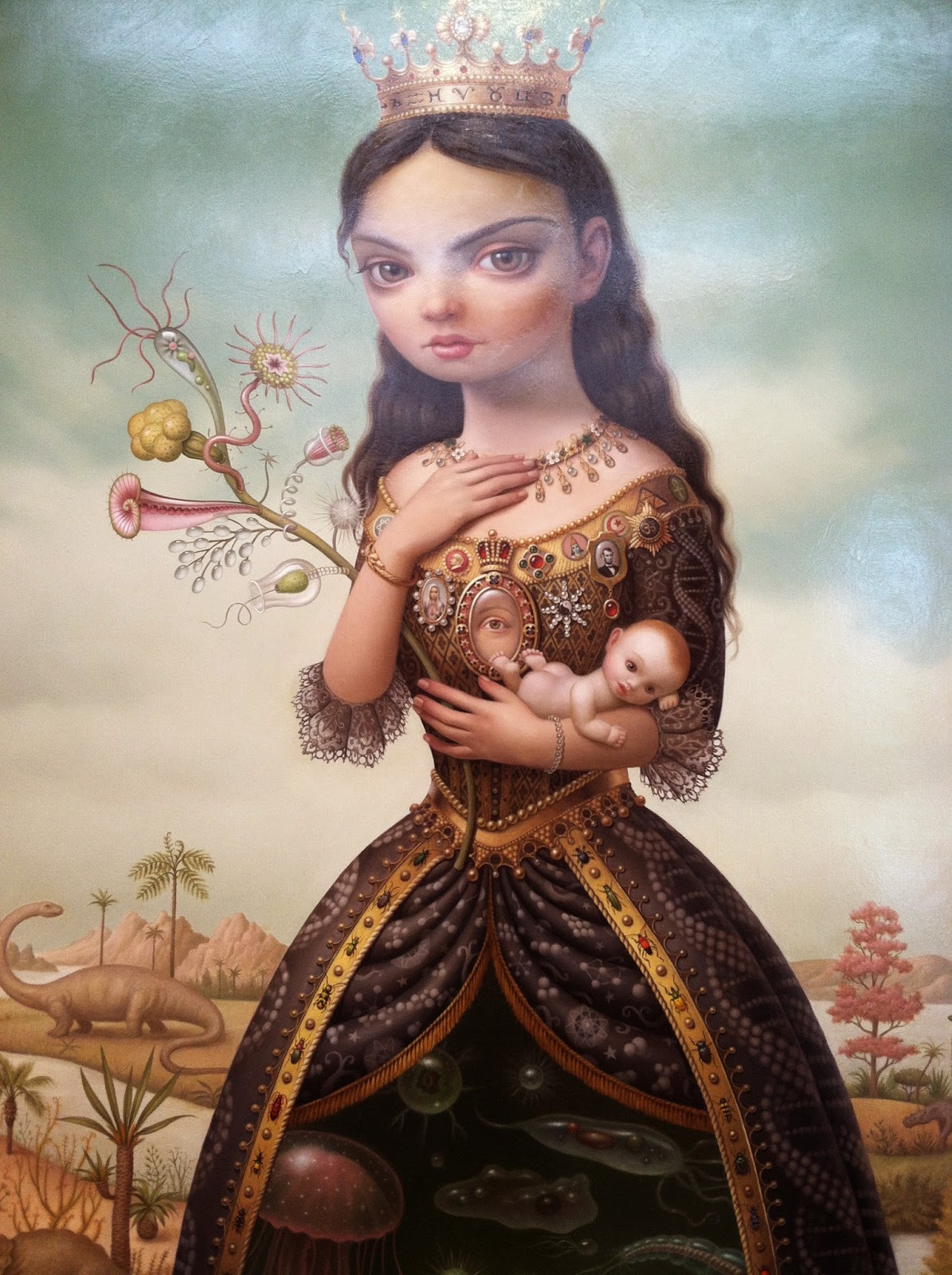 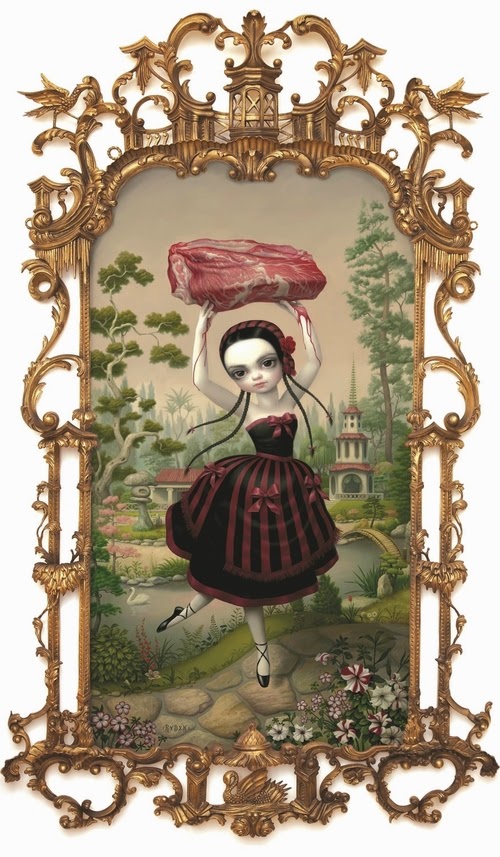 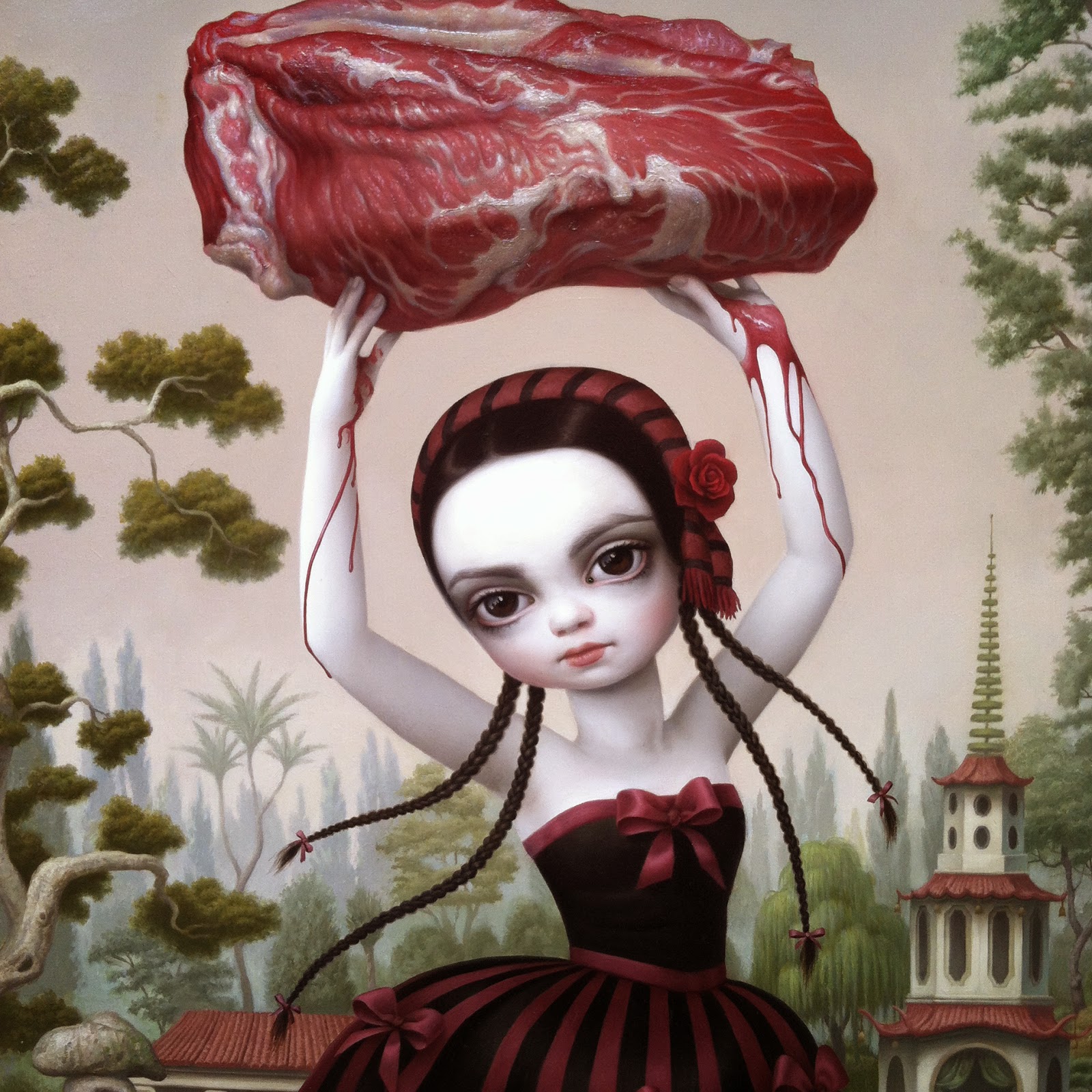 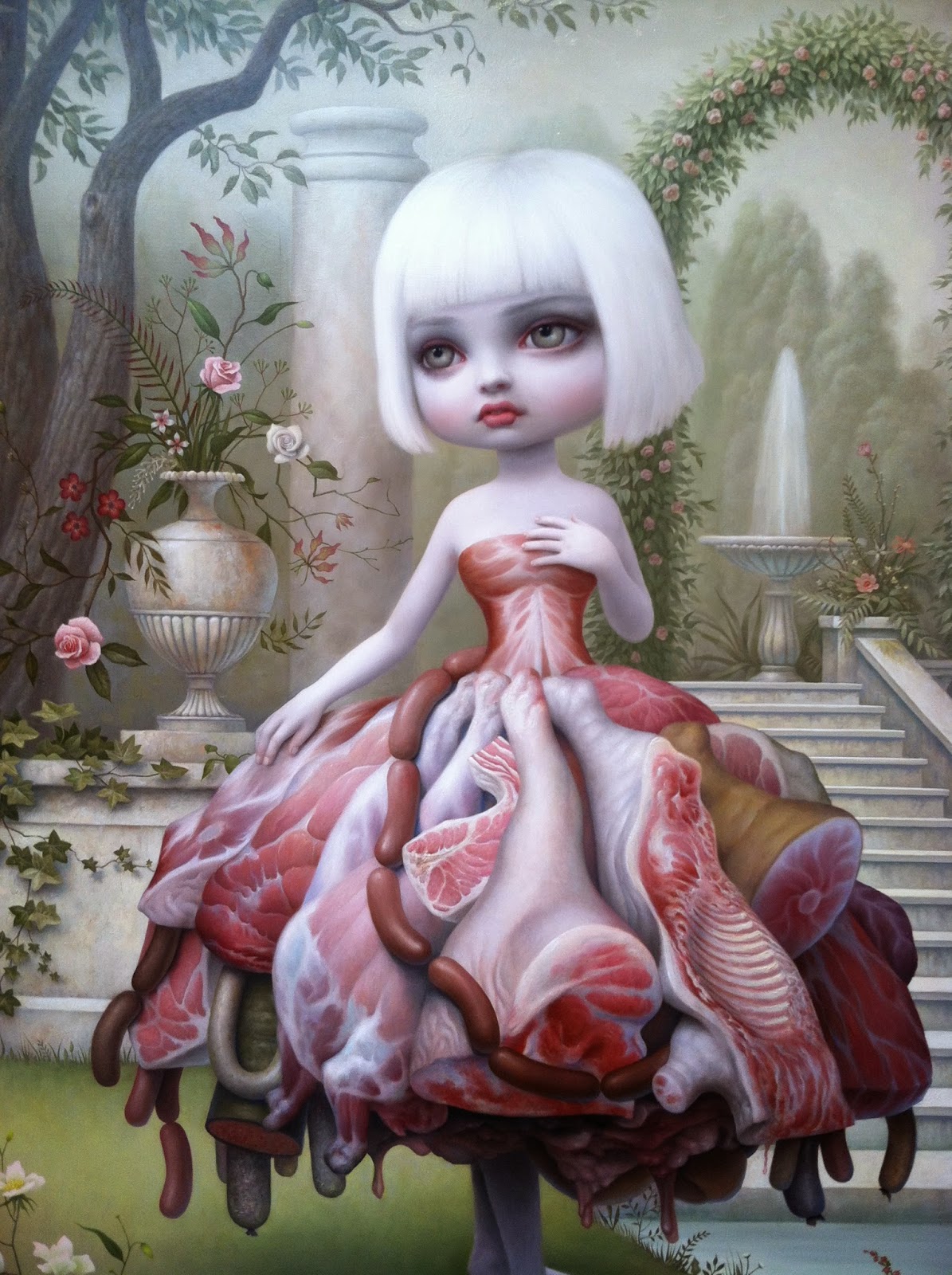 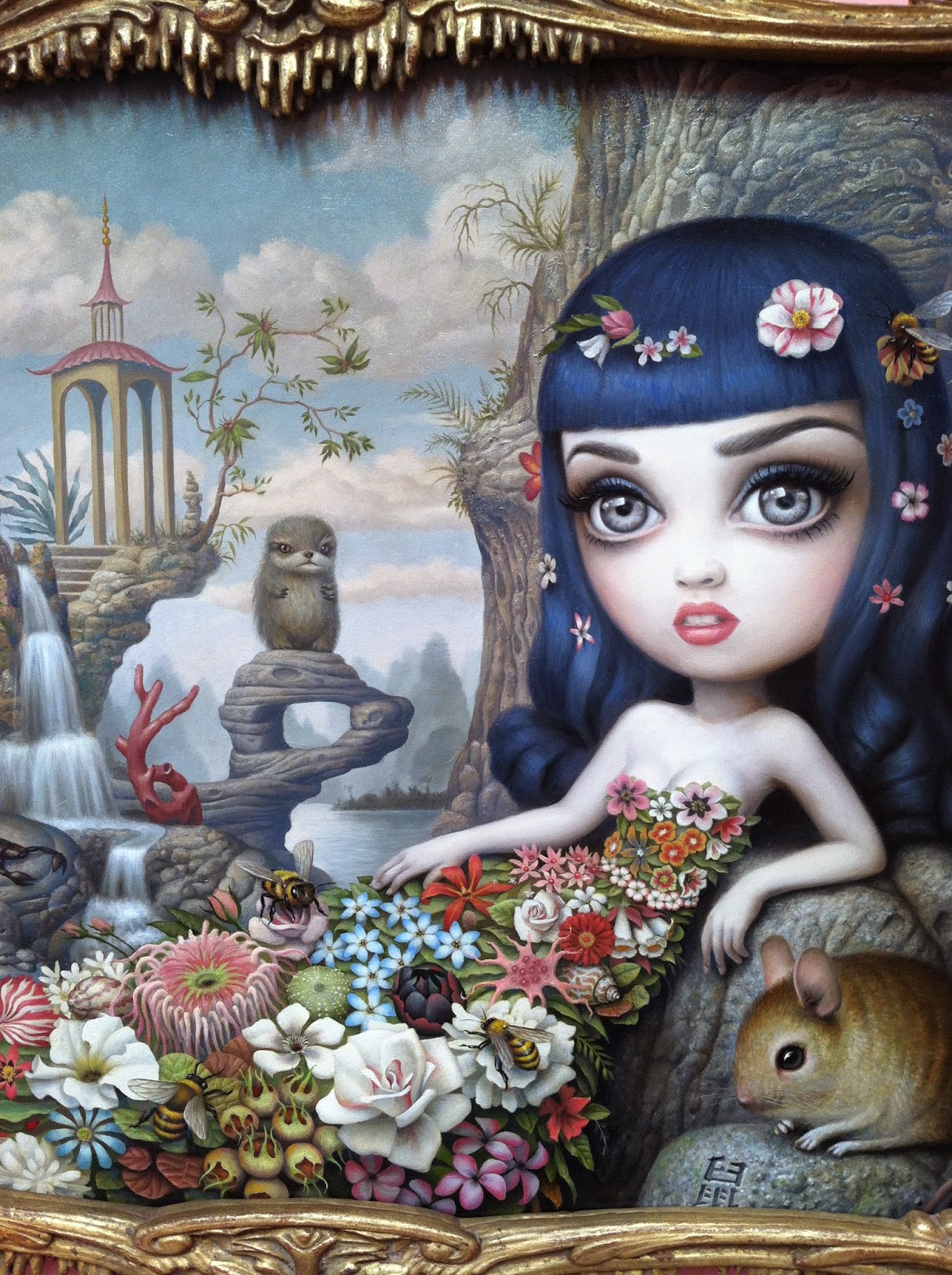 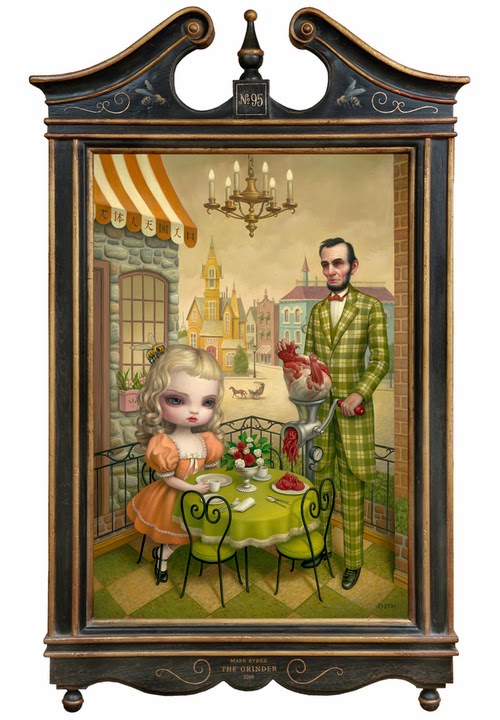 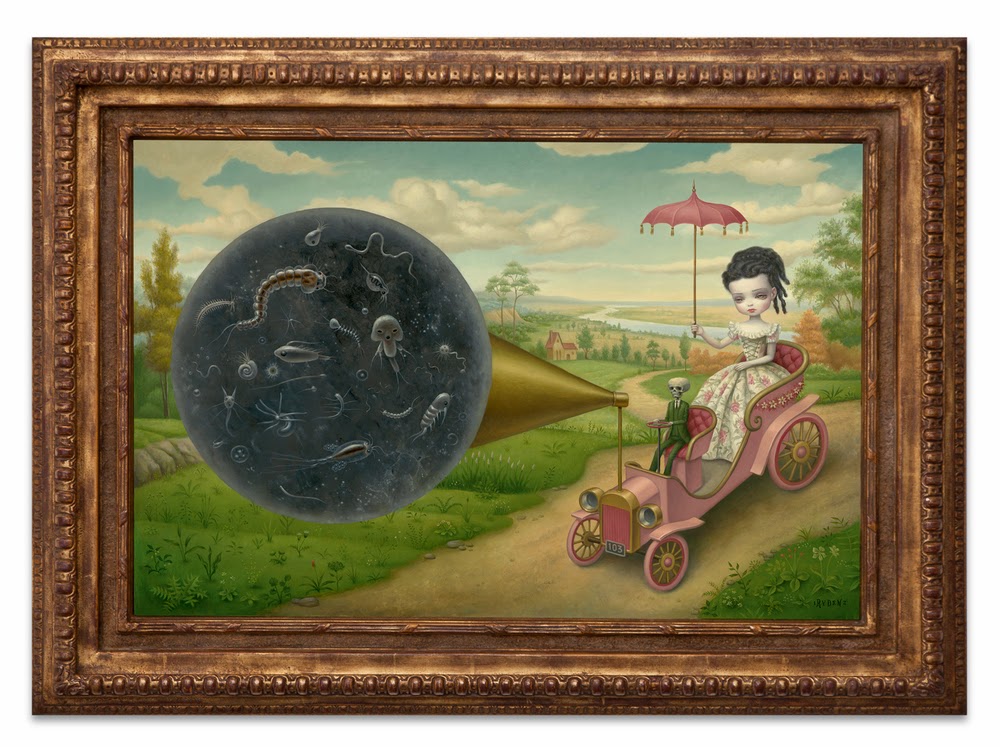 
On the occasion of Gallery Weekend Berlin 2014 Blain Southern presents a solo exhibition with works by Lynn Chadwick. In the center of the show and presented on the ground floor of the gallery space is the Beasts series, dating from 1989-1991. A number of Lynn Chadwick’s bronze works from the 1950s and 1960s such as Encounter IV, Watcher V or Two Reclining Figures are presented on the upper floor. Jess Fletcher (assistant curator) talks about the concept of the exhibition and the developing process of the Beasts series. Eva Chadwick (the artist’s widow) shares a personal story related to the sculpture Stranger II (1956) and explains the uniqueness of Lynn Chadwick with the work Maquette IV Moon of Alabama (1957).
Lynn Chadwick: Retrospectives at Blain Southern, Berlin. Gallery Weekend Berlin (2014); Interview with Eva Chadwick (widow of Lynn Chadwick) and Jess Fletcher (assistant curator); May 2, 2014. Video and interview by Frantisek Zachoval.
at May 12, 2014 No comments:

One of the most beautiful and provocative public art works is located in the lobby of the tallest building in Los Angeles (and west of the Mississippi). The work is called "Unity" by Vitaly Komar and Alex Melamid, also known as Komar and Melamid. Komar and Melamid immigrated from the former Soviet Union in the 1970s. The duos work is known for their art about the Soviet Union using both conceptual and postmodern strategies.

For Los Angeles, Komar and Melamid reflect on both the founding of Los Angeles and the current state of a multicultural Los Angeles. The lobby portrays three angels, each perched on the 3 walls that welcome both visitors and tenants to the US Bank Tower. The angels are based on ones found in Renaissance art. The center angel is dressed in blue and gold. The halo is based on  African, Asian, and Native America motifs and symbols. The side angels are rendered in a energetic manner where they appear floating in a storm of intense energy. While the side angels are floating is a storm like environment, the center angel seems at peace with the symbols from various cultures uniting in the halo. This unity is what Komar and Melamid is trying convey to the viewer. The angel, in which the city of Los Angeles is named after, is at piece when the cultures are unified.The lower side plaque gives the story of the founding of Los Angeles. This public art work is a well worth the time to see.

Located at 633 West 5th Street, Los Angeles, California in the lobby of the US Bank Tower. 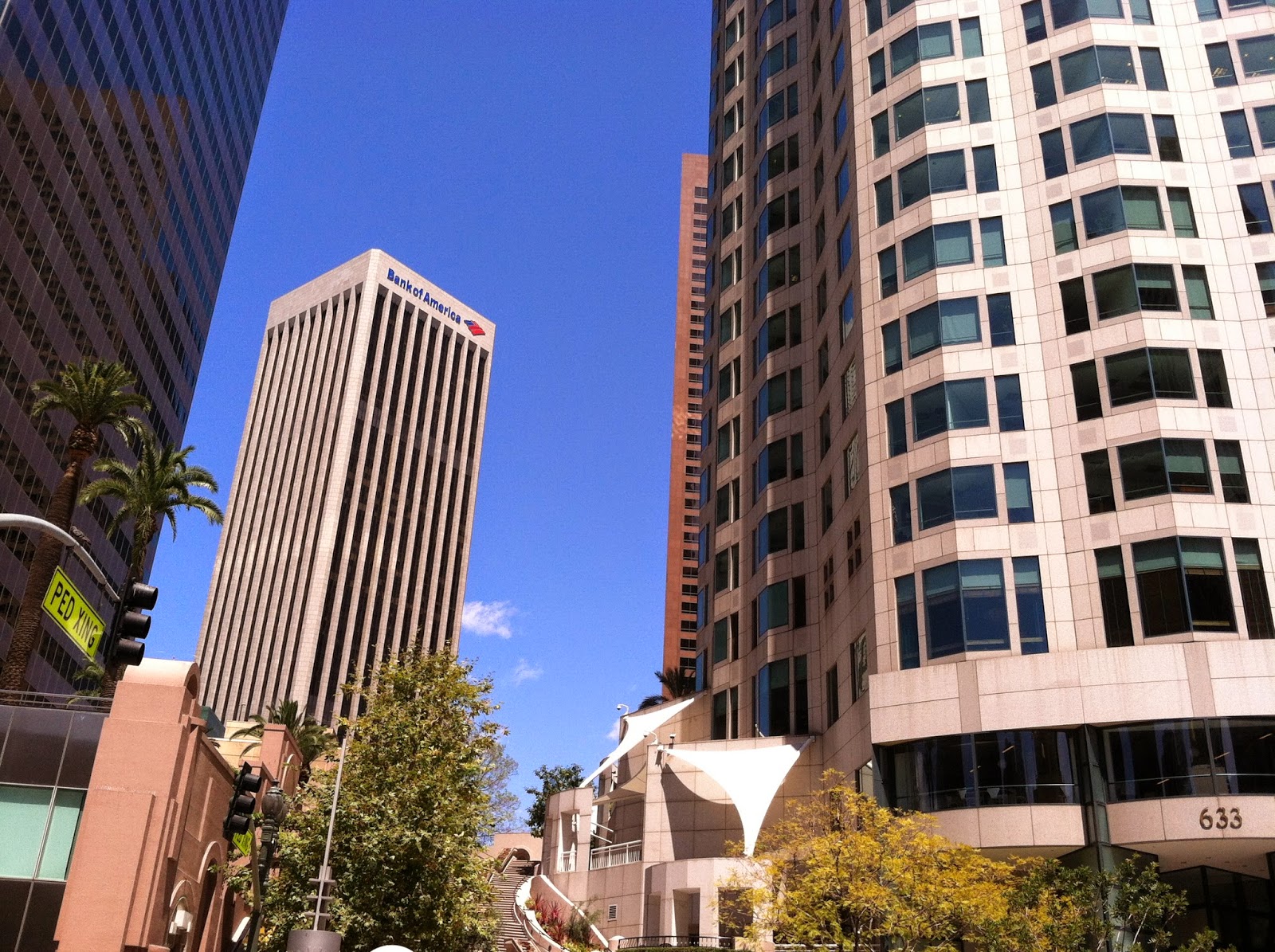 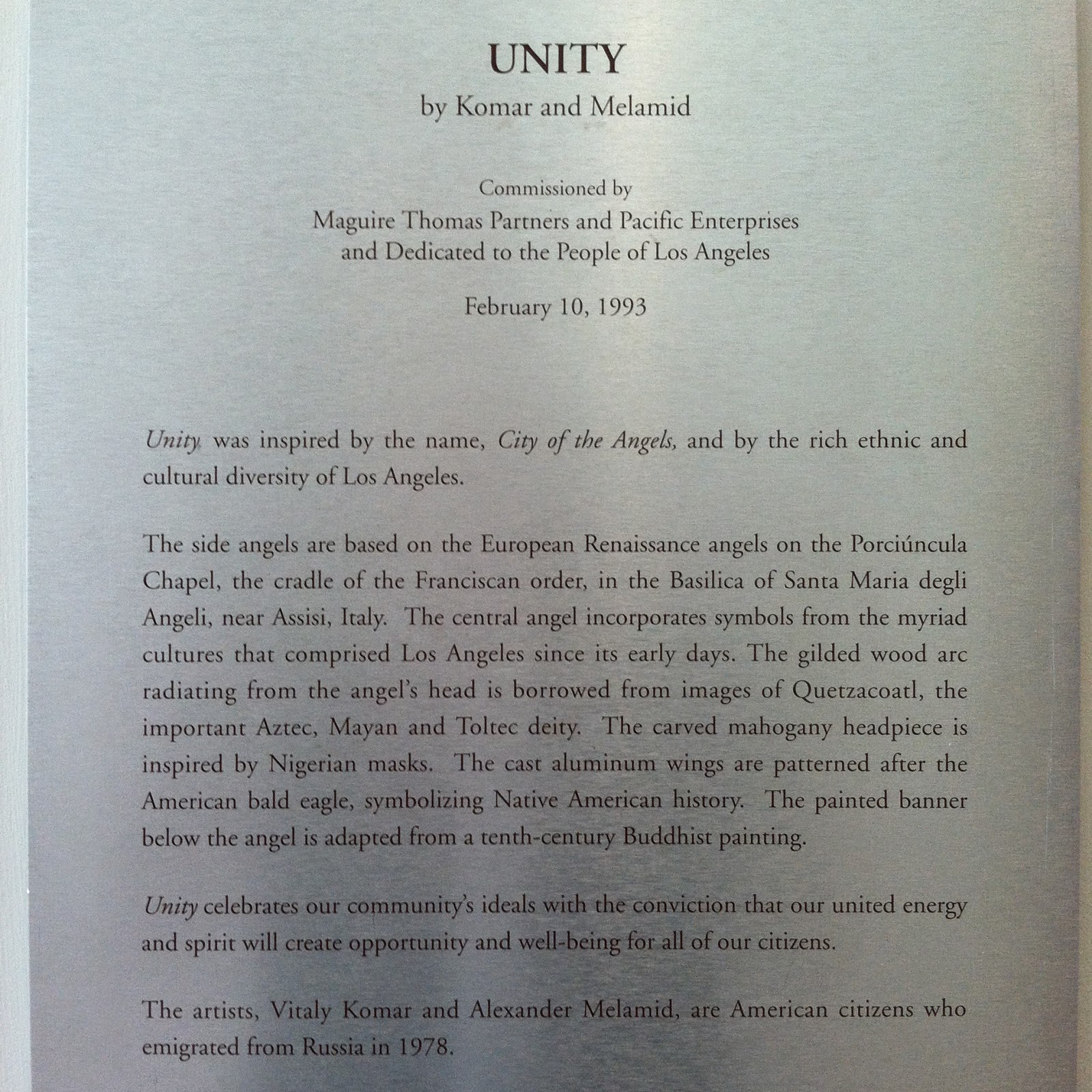 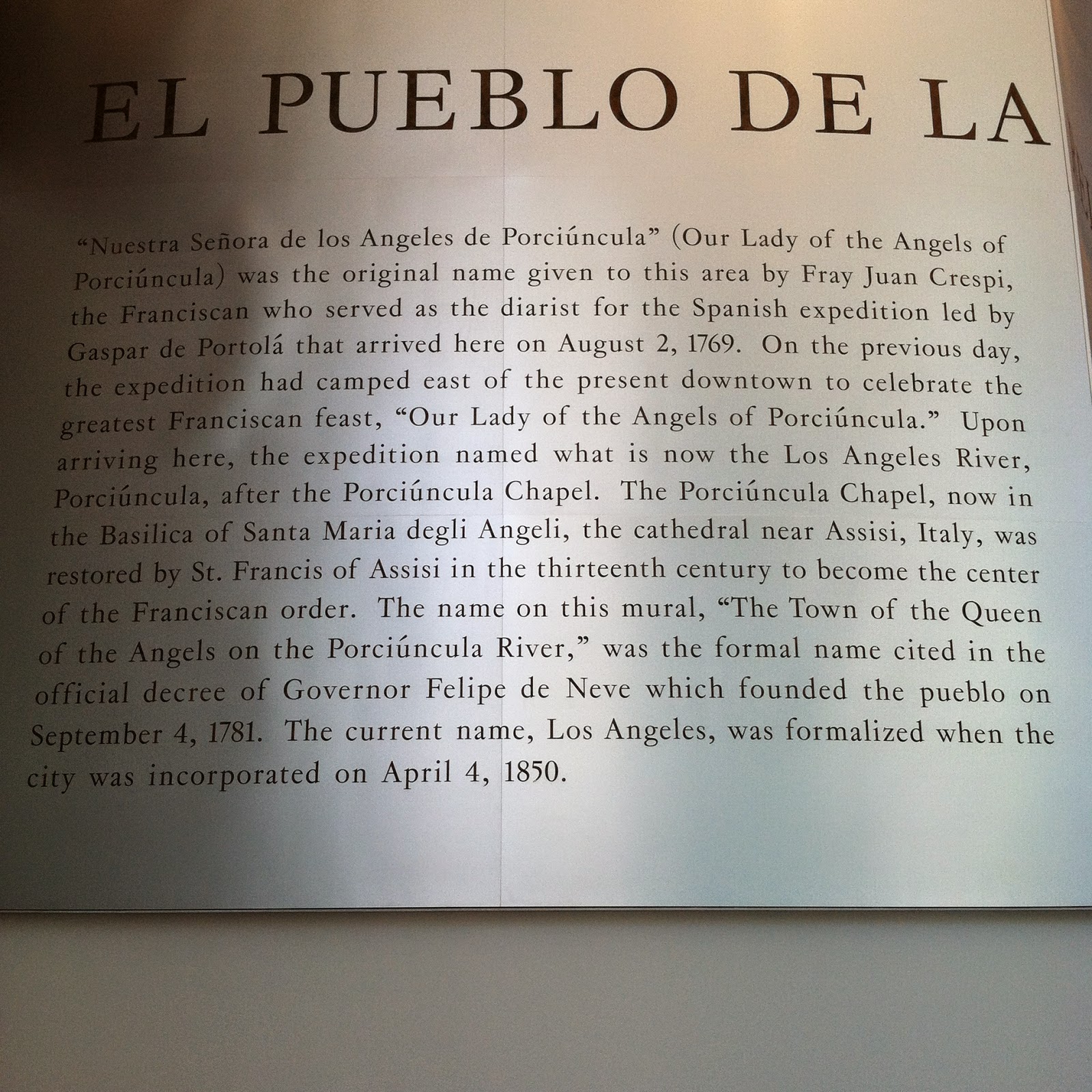 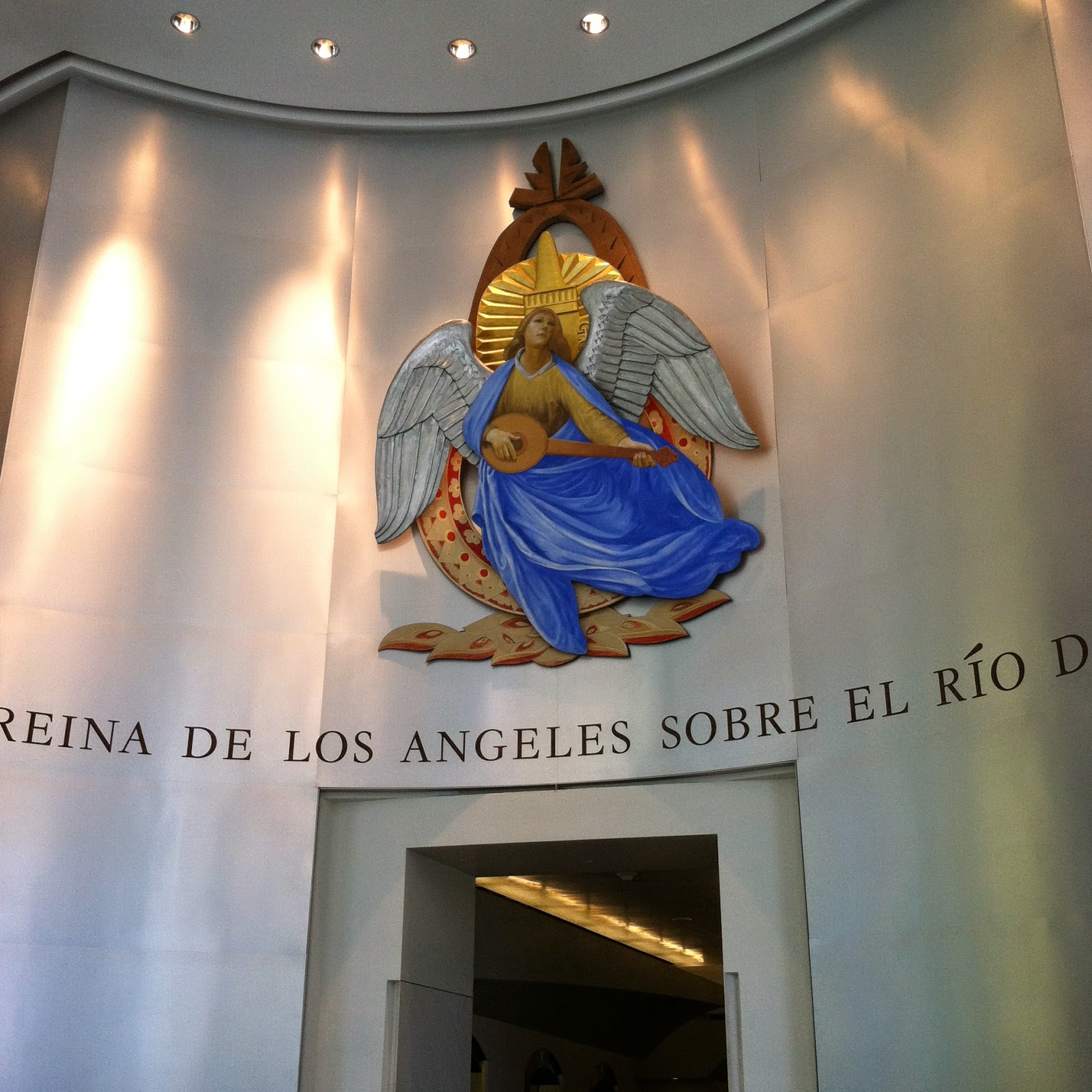 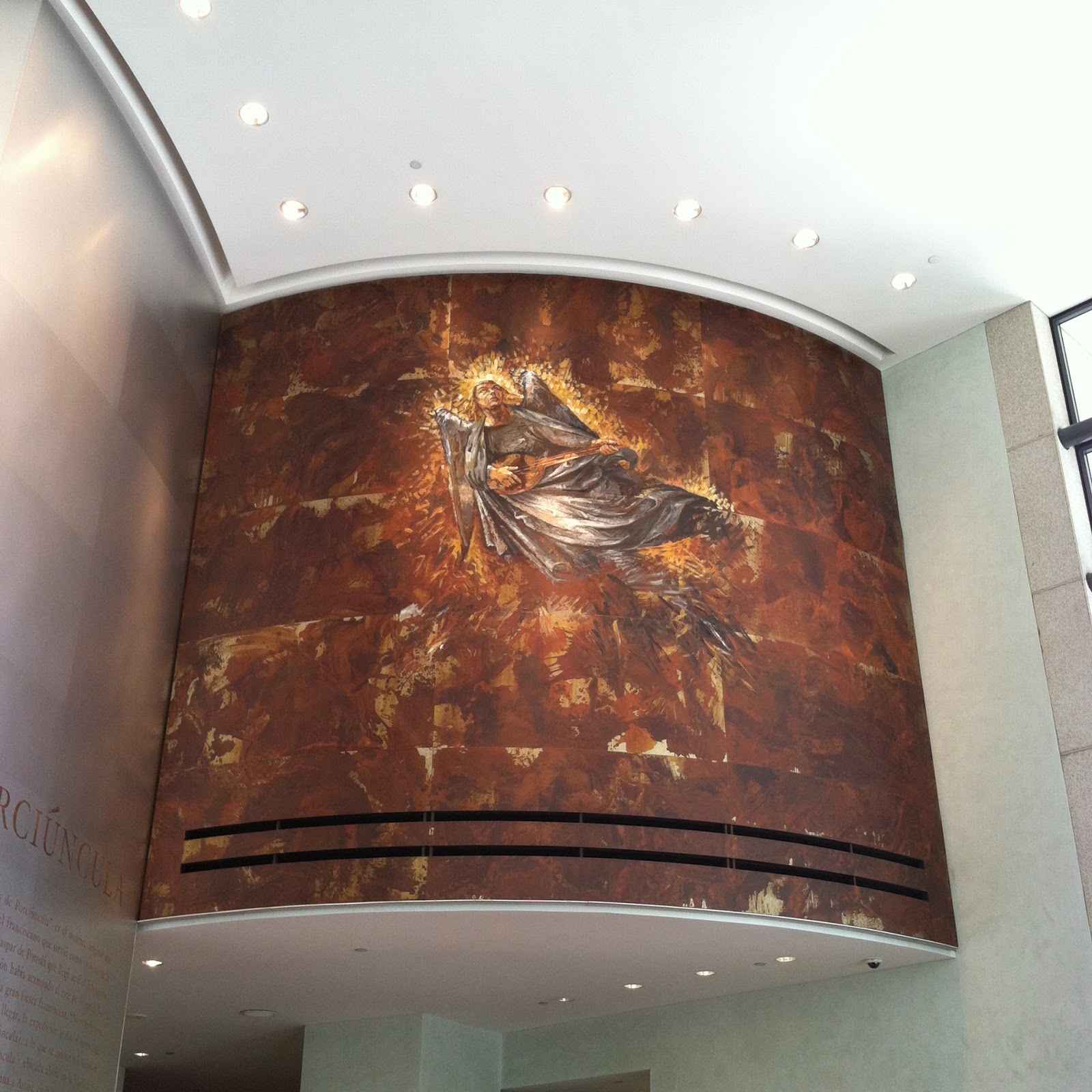 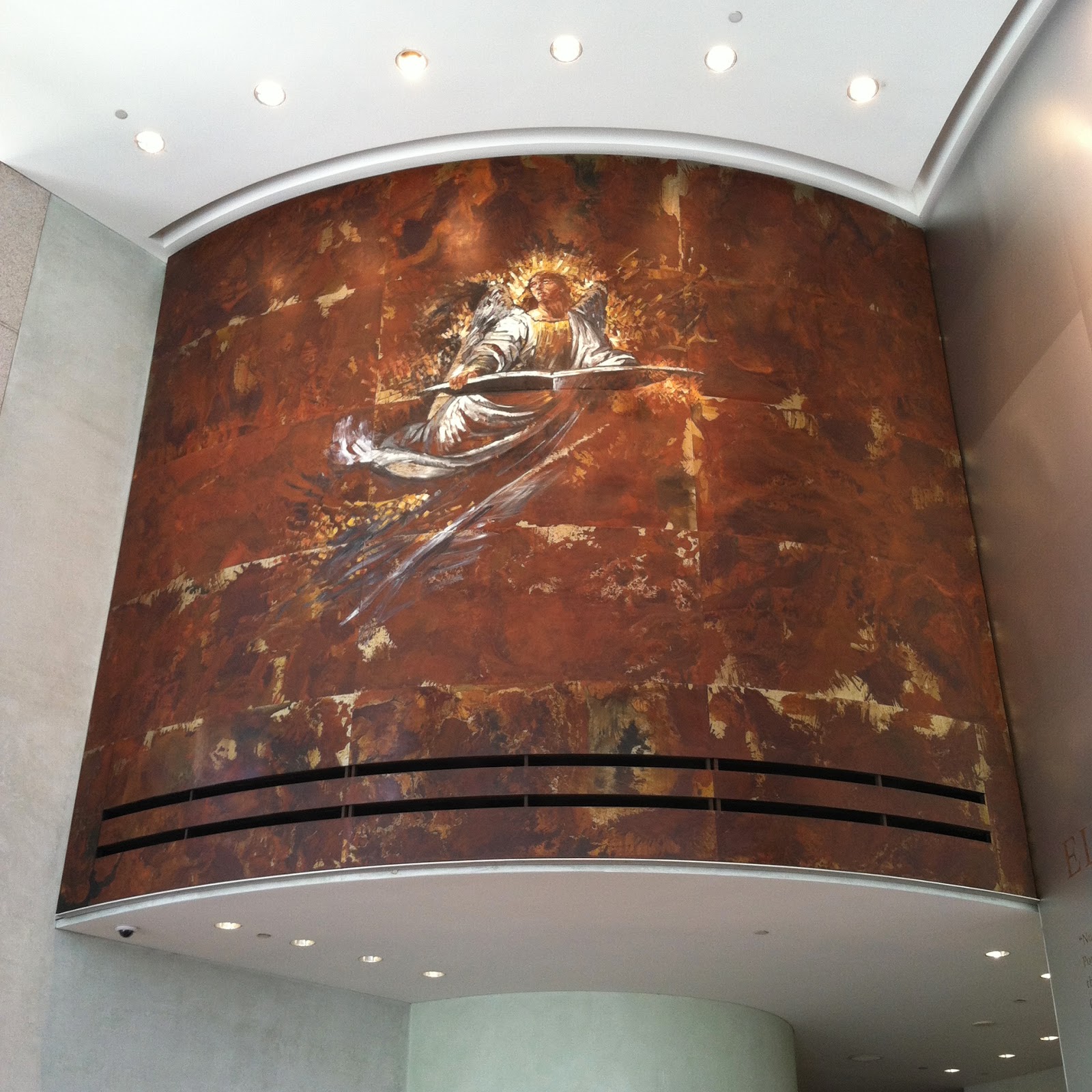 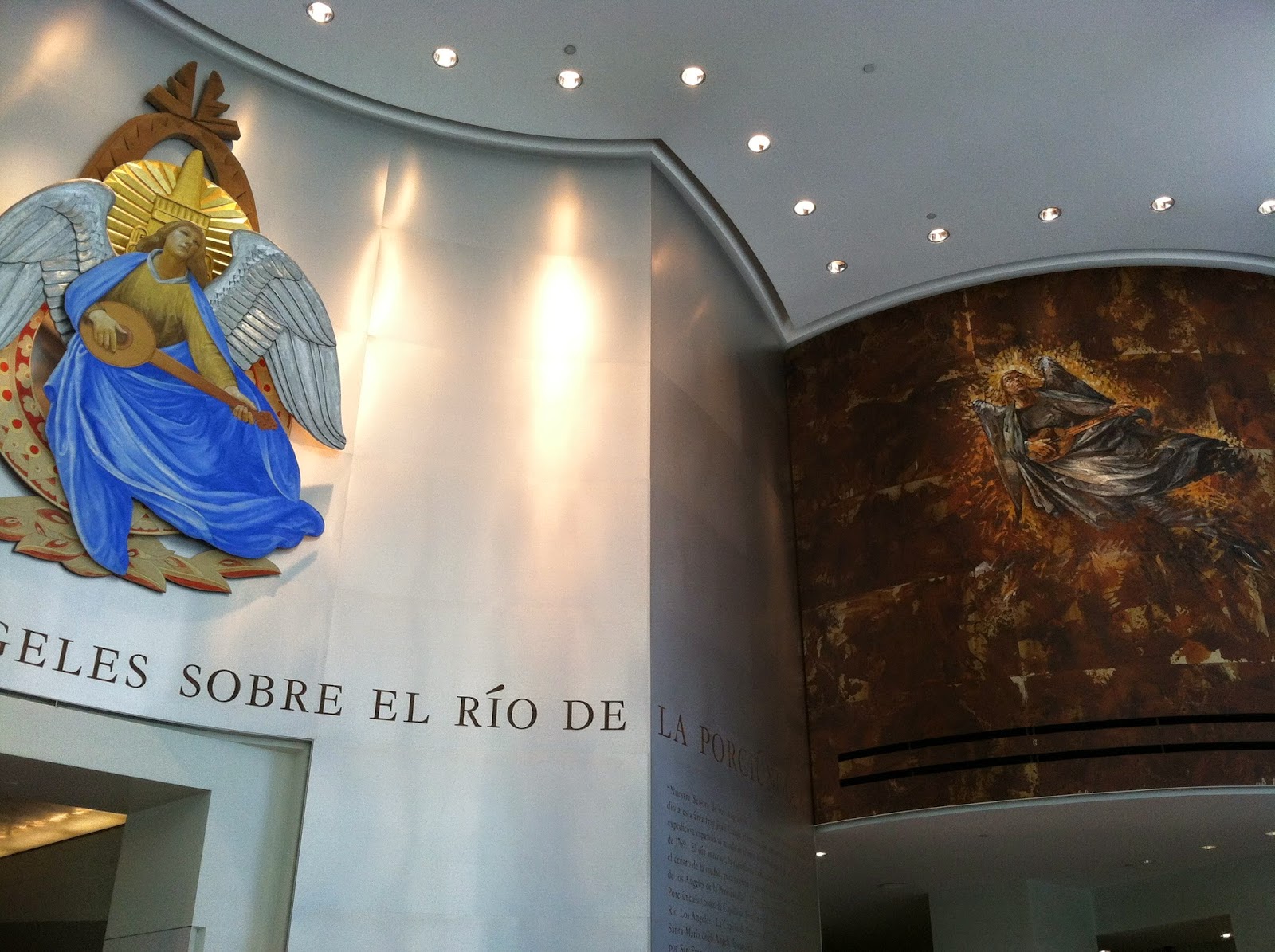 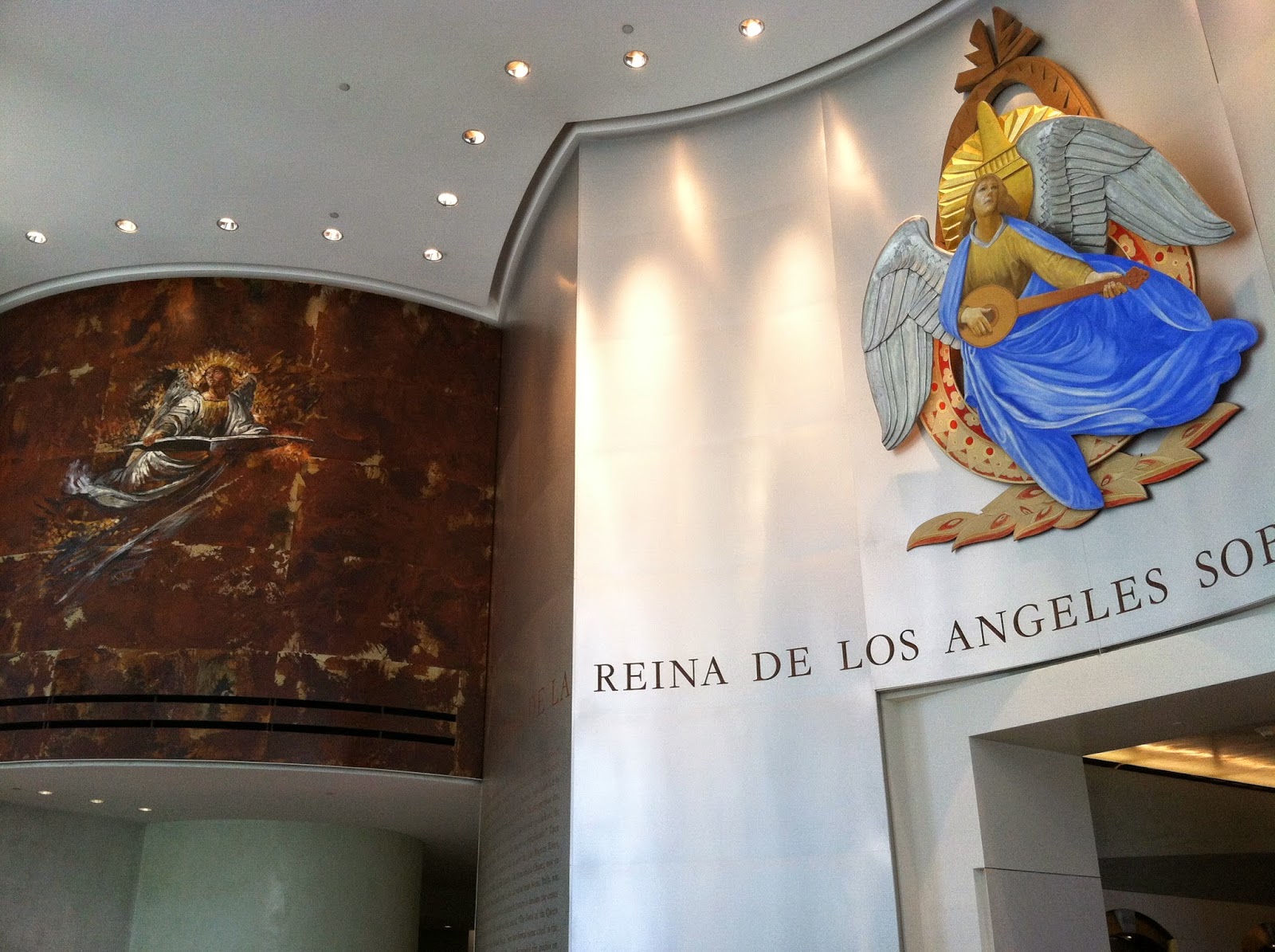 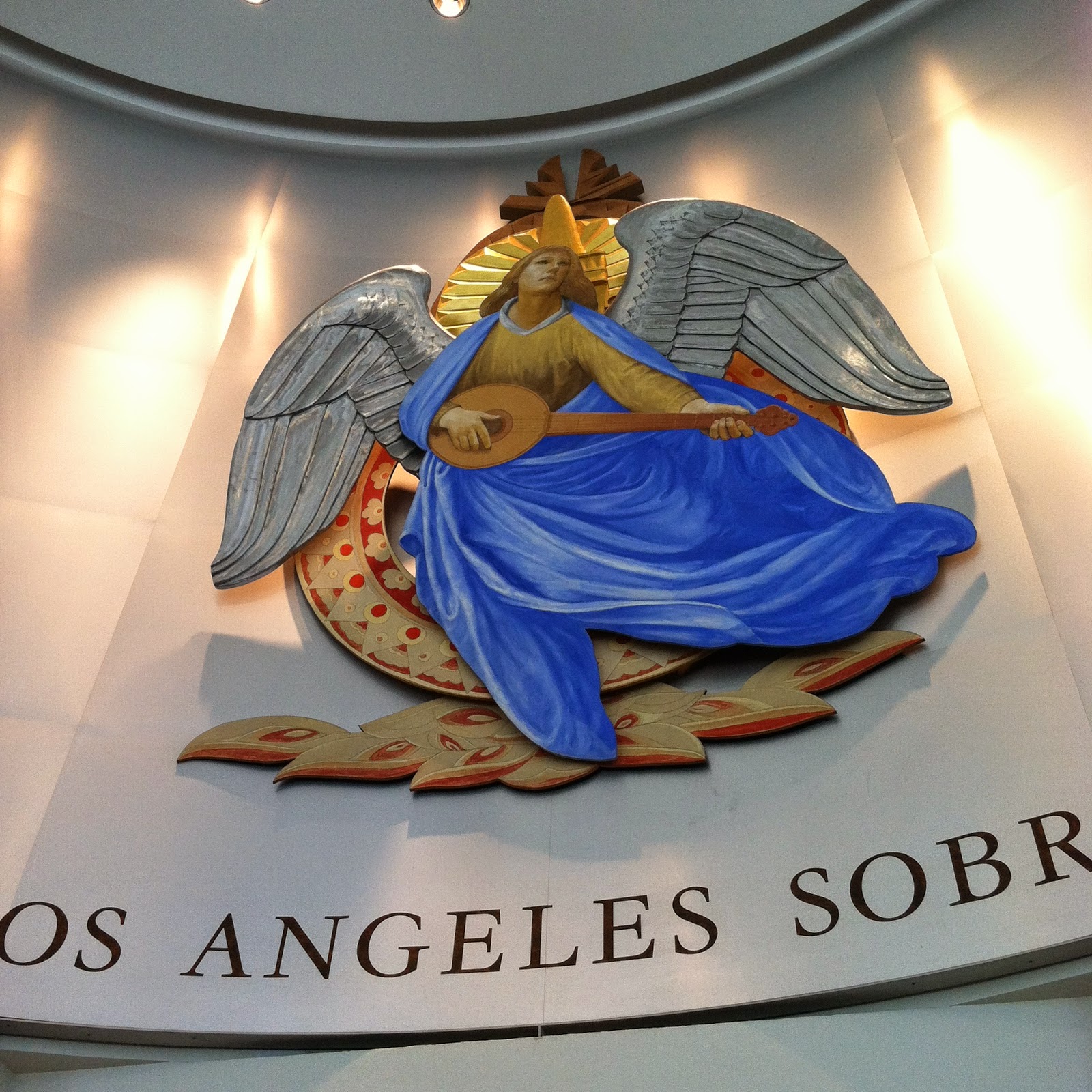