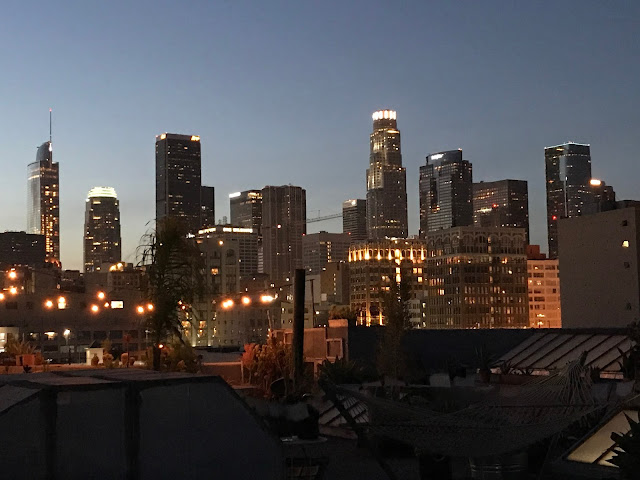 GAIT presents Slightly Flexible with artists Daniel Klaas Beckwith, Mickey Everett, Sydney Kinzie, Daniel Schubert, Theresa Sterner, and Pamela Valfer. The exhibition will be on view from April 23, 2017 through May 14, 2017 with an opening reception on Sunday, April 23 from 7 to 9 pm. Following the reception, please contact gaitprojectsla@gmail.com to view by appointment.Designed by architects Leonard Schultze and S. Fullerton Weaver, the Biltmore Hotel and connecting Biltmore Theater opened off Pershing Square in downtown Los Angeles in the 1920’s. The theater was demolished in 1964, and in the 1980’s a 24 story skyscraper named the Biltmore Tower was constructed on the site; while the neighboring Biltmore Hotel remains intact as a protected historical building. The Secretary of the Interior’s Standards for the Treatment of Historic Properties dictates that a contemporary addition to any historical building must be compatible but distinct in aesthetic, so the average viewer understands that the buildings are different. In addition, the guidelines state the tower addition must be designed and built without affecting the structure of the hotel, so that it may be torn down at any time. In accordance with this guideline, a seismic joint separates the Biltmore Hotel from the Biltmore Tower.  Although the hotel and tower appear to be one continuous structure, in actuality, there are six to eight inches of negative space hidden behind the street facade connecting the two buildings. At any moment, an earthquake could force the two buildings together.Like this seismic joint, the works in Slightly Flexible exist as quiet spectacles, offering subliminal information that draw attention to the subtle shifting forces in the greater atmosphere. The artists use video, performance, and object making as a means to examine instantaneous belief, the language of ambience, and the potential of data. While exploring this phenomena, the artists will activate the street and rooftop of the Wayside Press Building and the skyline of downtown Los Angeles.Daniel Klaas Beckwith questions the economy of belief through object making and performance. Beckwith presents for the exhibition a fake Google Street View surveillance vehicle as it continuously searches for street parking, viewed from Gait's roof top vantage.  Examining the complicated history of water in Los Angeles, Daniel Schubert and Mickey Everett of Los Angeles Aqueducts will present video documentation of their performances on location at various water bodies around Southern California. For the opening of the exhibition, amateur kite flyer Sydney Kinzie will pilot a handmade kite from the rooftop of the building. Theresa Sterner offers a seating area to view the sunset during the opening reception; a projection of a sunset played in reverse from dark to light; and a gift shop selling souvenirs like postcards and mugs with imagery of the sunset. In Pamela Valfer’s untitled (2017), a found footage tour of Saddam Hussein’s residence from the first person perspective is displayed twice, side by side in the video frame, simulating the experience of Double Vision.
GAIT
www.gait.la
Contact: (T) 703-586-0795 (&/or) 407-718-3115gaitprojectsla@gmail.com
Please email for location. 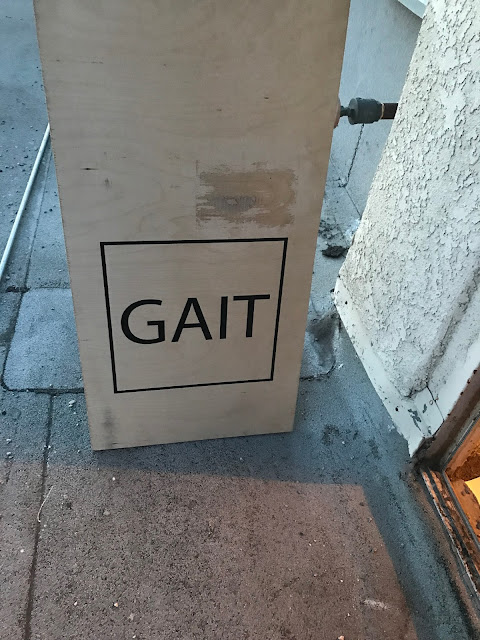 The language of abstraction has a fluidity that has been prevalent in modern and contemporary art. Three recent exhibitions in the Bowery demonstrate the range in which abstraction can visually explore both the natural world, the man-made world and world created by the artist within the work itself.

In the two person exhibition at Kristen Lorello gallery featuring the paintings of Halsey Hathaway and the sculpture of Julia Kunin, the works communicate with each other with a cubist language. The small gallery is a site where the curves and color of Hathaway's paintings relate with the angles and edges of Kunin's sculptures. Hathaway's paintings remind me of Robert Mangold's curves of his earlier work with a polychromatic infusion within each curve and structure of the composition. Kunin's ceramic sculpture seem almost natural; as if some great force of nature carved each work. Kunin's sculptures glistens in the light as the angles and cubes protrude from within and outside. Both Hathaway and Kunin are steeped in an internal language of abstraction that play with each other in forms and composition. Angles correspond with curves, line relate to form, and solid mass with plane. Like the way in which a gem is cut and molded, Hathaway and Kunin create a multifaceted environment within the gallery.

Sao Paulo based painter Caetano de Almeida's paintings at R11, just down the hall from Kristen Lorello, demonstrates an artist's ability to explore the nature of abstraction as it references both the man-made world and the mythological. Almeida uses optics and patterns to explore both native Brazilian culture and references to myth and movement. Mandjet is a painting that refers to the boat that the Egyptian god Ra would travel, also known as the Boat of Million Years. Optically simple with orange, yellow and red lines, Almeida manages to construct a detail that leaves the viewer in another place and time. Abstraction references the movement across the canvas by almost unraveling the squares and composition; almost like fabric coming apart. Mademoiselle forms and shapes on canvas seem to trace dance moves on the picture plane. By using abstraction as a point of reference and thus leading the viewer to something beyond the canvas, abstraction becomes a language used by Almeida to connect with the viewer and relate to something more than the work itself.

Elliott Green's exhibition "Human Nature" at Pierogi connects a traditional approach to abstraction and at the same time creating a new context for abstract painting. From the late 19th and early 20th centuries, Monet, Cezanne, and others explored abstraction for the purpose of creating and portraying the landscape. Green's work uses a very identical approach by creating an landscapes from abstracted forms and layered painting. The paintings depict mountains and valleys. Geology and nature play a role in Green's paintings as the paint forms the landscape. When looking at the work, I often see Chinese landscape paintings in the way nature and form take hold of the canvas. Jana Prikryl notes in the essay for the catalog that, “Elliott Green’s paintings appear to be in continuous motion, the way animals, plants, and ultimately rocks and mountains are in continuous motion, even when our human vision fails to apprehend it. Placing great thick gestures of paint amid minute intricacies and vice versa, his compositions demonstrate the movement of the universe on both the macro and the micro scales.” Green thus uses abstraction as a way to form the natural world, It is the sublime vision that attracts Green's paintings to the viewer. It is the connection of the sublime to the Earth as landscape that connects both Green to early Modernist works. However, the approach to the world within each of his paintings creates something that is very 21st century.

Three recent shows in the Bowery demonstrate how artists are creating abstract worlds. Abstraction is a language where successful works communicate to both the viewer and in many cases the works communicate with each other. It is not enough for a canvas to be populated with paint and content. Great abstraction takes the world, reconfigures it, and reframes it so the viewer is granted a new and positive experience. The shows at Kristen Lorello, R11, and Pierogi are examples of great abstraction that transcends the experience of the viewer and communicates a language that is distinctly contemporary, 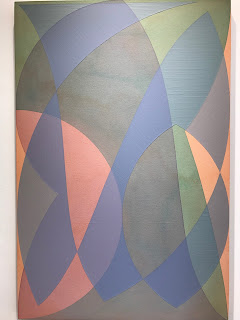 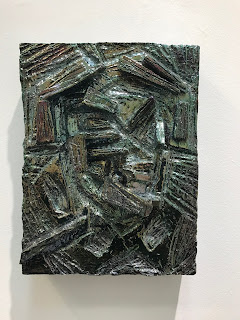 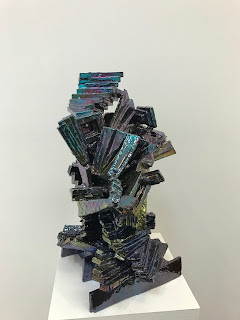 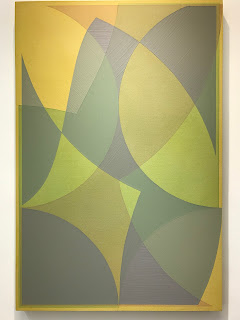 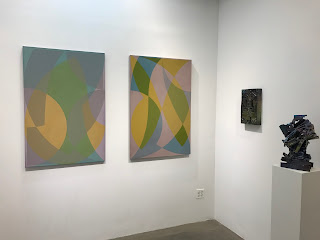 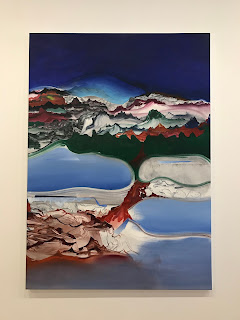 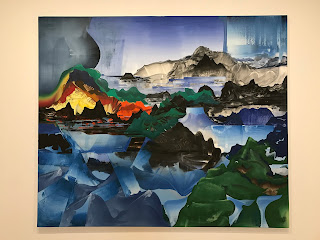 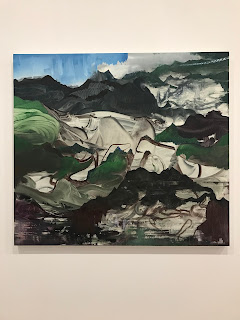 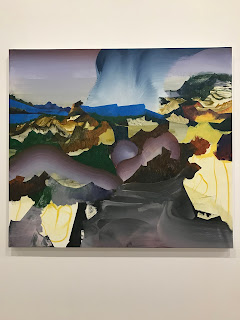 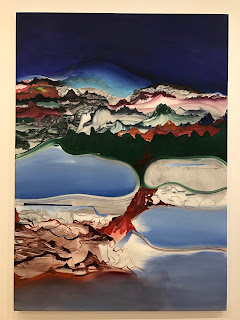 For his first solo exhibition with Lisson New York, Mexican artist Pedro Reyes presents a group of new sculptures made from volcanic stone, marble and concrete. Surrounding these are over 150 works on paper, installed floor-to-ceiling on the gallery walls. This is the first presentation to feature drawings by Reyes at such scale or diversity.

Ranging from the intimate to the monumental, these new works resonate with both modern and ancient sources. Reyes has been looking closely at the history of statuary. Echos of Modern masters like Germán Cueto and Luis Ortiz Monasterio in Mexico; Frank Dobson, Reg Butler and Lynn Chadwick in the United Kingdom; Gerhard Marcks and Ernst Barlach in Germany; and Pierre Szekely and Marta Pan in France, may be found in some of the sculptures.

The materials Reyes employs in these sculptures further the careful attention to ancestry. Volcanic stone is a recurring material for the artist, and he notes both its integral role in the shaping of Mexico’s landscape and its deep connection to the diet of its inhabitants, used for millennia to grind corn in metates and molcajetes, the traditional Mexican version of the mortar and pestle. Other works in the show range from the luminous marble of Carrara—long beloved by artists and architects as well as abstract sculptors such as Sergio Camargo—to concrete, which offers the artist new and entirely different plastic possibilities thanks to the interplay of cement and steel armatures.

The son of a professor who taught advanced engineering drawing, Reyes received informal training from a young age in the technical process of rendering three-dimensional objects. This early understanding has been an essential part of his practice ever since. For Reyes, it is a fluid movement between the creation of drawings and sculpture, and vice-versa, and the dizzying multitude of works on paper in this exhibition exemplify the complexity of the relationship. The 156 drawings papering the entirety of the gallery’s east and west walls, extend Reyes’s concerns with sculpture and art-making to encompass many of the radical thinkers that have informed Reyes’s practice. They feature a varied set of artistic figures, such as German-American Social Scientist Kurt Lewin, Vietnamese filmmaker Trinh T. Minh-ha, conceptual artist Lee Lozano, Colombian mathematician Antanas Mockus, Chilean video artist Juan Downey, and Italian-born Brazilian modernist architect Lina Bo Bardi, among others. 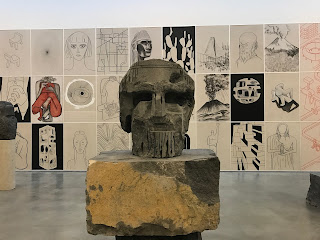 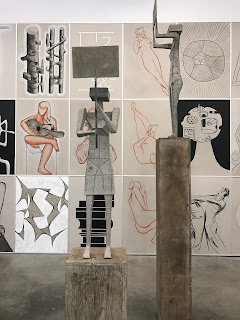 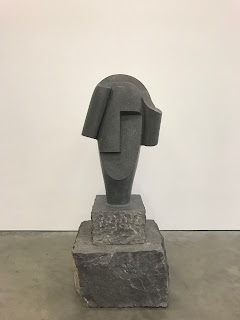 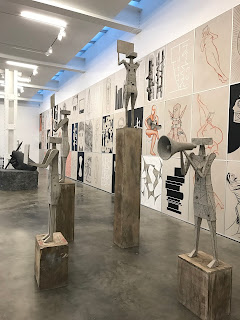 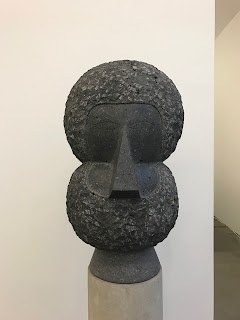 Contemporary art has always asked the question, “What is now?” The Whitney Biennial always asks, “What is now in American Art?” Set in the new Renzo Piano designed building, located in the meatpacking district of Manhattan, the 2017 Whitney Biennial attempts to define American Art in the context of the current political, economic, and social situation of the country. With the recent election of... (READ MORE)
at April 10, 2017 No comments: